We are heading towards the end of the red carpet season and the fashion for BAFTAS (British Academy Awards) 2016 was a big surprise.
Usually it is a red carpet where during the season where stylist are trying to save the best dress for the Oscars so usually the Peoples Choice,SAG  and BAFTAS Award red carpets are left over dresses which didn’t made it to the Golden Globes Awards but not the star which will be seen at the Oscars. Which is why when I saw how much fashion statements and well dressed the starlets were (a bit disappointed too because no worse dress for me to joke about).
Textures and embellishments continues to become a trend while several starlets decide to go minimal and elegant. What truely stood out is more than ever, the starlets truely know the role they play interms of Red Carpet Style so I’ve decided to pick 10 looks which is worth nip pick discussion.
Without further doodahs, here are the looks. 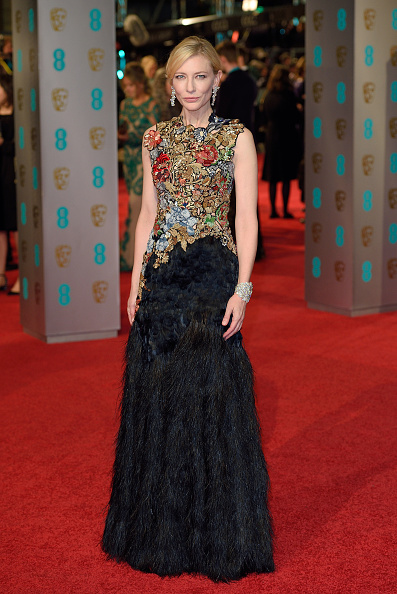 The queen is back of the red carpet in McQueen. This is the typical Blanchett formular- Dramatic, Unique and not easy to wear. I was waiting for her to wear Alexander McQueen to the red carpet season this year so I find it beautiful as usual.  My only complaint being her major fan, since the bodice was paired with jeans at the fashion show , they paired a feather skirt which came from the same dress Cate have worn to the Met Gala a few years ago. Just wish the skirt is something different but I am just nip picking because I am her biggest fan. Perfect hair , makeup and jewellery.

Sorry Cate, this is my personal best dressed of the night because this is truely a case of the wearer pulling off a dress which is so wrong work in so many ways.  In concept, I hate the dress on its own because it look like a gown version of warrior princess armor decorated with tinsels.  However for some reason, her unique beauty made this unusual dress work like its a silk gown with crystal embellishments and to remind everyone this is her first awards season red carpet.  She have proven herself that she is the Lupita Ngong’o or this year’s red carpet.  Can’t wait to see what she wears to the Oscars (definitely Louis Vuitton because of her contract).

Yes, this is the same body-con column gown she have worn on the red carpet in the past 10 years but you can’t deny she looks beautiful.  The neckline and the arm detail is edgy for her and eventhough the clutch blended in to the red carpet in photos, the pop of red really sexed up the look. My only complaint is that I wished she wore a red shoe to turn it into a styling colour blocking.   She is super lucky that it was a windy day in London because 80% of the photos look like she had a wind machine around her.  Eventhough I always don’t like boring but you can’t deny the fact that she looks and feels beautiful and thats whats important. 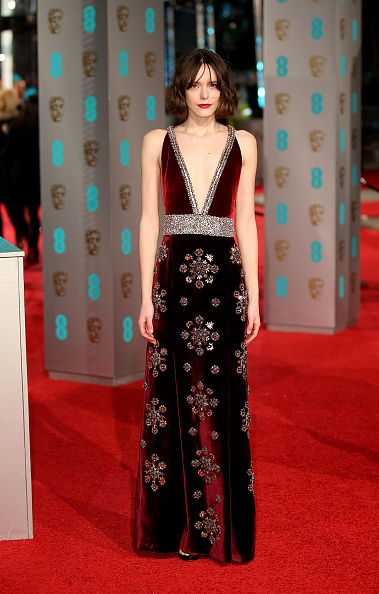 Although this look did not get much coverage from the press, for me this Miu Miu dress was one of the best dresses of the night. From the richness of the red velvet, the crystal applique to the plunging neckline, this is sexy yet very regal and romantic.  The dark red does not clash with the red carpet and the makeup and hair is on point.  Miuccia Prada fails 80% of the time in terms of red carpet gowns but this is one of the most memorable since Lupita’s baby blue dress when she won her first Oscars.

Dakota Johnson wants to put herself as Americas New Sweetheart – the next Jennifer Lawrence and this Dior dress is perfect for her ambition to take this role.  Its simple, pretty and appeal to the general American Public.  The simple hair and makeup is beautiful and I am glad she didn’t go overboard with the jewellery.  My wish is I hope she doesn’t wear Red, Black, White or Silver to the Oscars because its slowly feeling like she is trying to hard to dressing up as her 50 Shades of Grey character going to awards shows.Dree Hemingway in Erdem

Speaking of Red, I love a printed dress so this look is another look that I love which I was so surprised didn’t get talked about as much as it should.  From the red lace which is difficult to pull off without looking trashy, to the red flower embroidery gives it a slight vintage feel and I really love the antique style silhouette.  This almost looks like an antique wedding gown dyed red.  The simple bun and the red lip made it modern.  Usually I hate red on red but this is done perfectly.

Flesh Coloured dresses seem to be Rooney’s go to colour for this year’s awards season- this is another predictable example- column dress in a lace like fabric, deconstructed frayed edges with super edgy hair.  Its very her and not a bad look, however I am PRAYING she doesn’t go for this colour again for the Oscars.  Almost enough for me to want her to wear black or white….

The silhouette is very basic but it is brave for a relatively new starlet on the red carpet to try such a bold embroidery fabric especially one with such a sweet face which I think she is close to pulling it off.  The side panel helped giving the dress shape although would love to see more of it to get more of an hour glass.  The hair and makeup is soooo pretty- love the cat eye with the ponytail. The problem is the necklace it is jarring and unnecessary.  If she wore statement earrings with a cuff this would’ve been perfect. Great dress ruined by bad styling.

This is the most elegant she has ever looked and better than the fussy Chanel looks she sometimes go for on the red carpet. The silhouette, the cut and train looks super chic.  I just wished she didn’t go for the ballerina bun because it seem abit age inappropriate.  Also this feels very under accessorised.  I get she tried to wear the black statement earrings to match the train and the shoes, I wish she went with statement diamonds and added a cuff  to glam it up and make it go with the red lip.  Improved yes. But please go to Tom Ford for the Oscars.

Thats it for now. Who was your best and worst dressed at this year’s BAFTAS awards? Please let me know  in the comments section.

Don’t forget to follow me on instagram (search for timtimwongbtw for mobile readers) for immediate updates of my life and #ootd photoshoots. 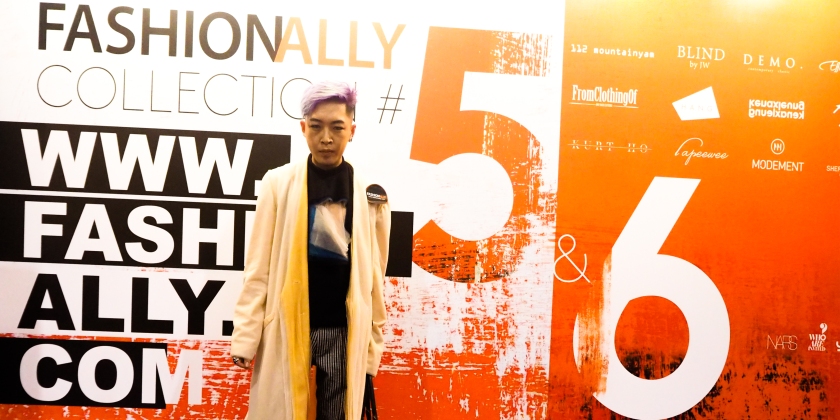 Hong Kong Fashion Week FW16 have just finished and most of your readers in this blog and my followers know how much I love wearing Hong Kong Fashion Designers.  In the past few years, I had the privilege to become friends with many talents in HK which means many of your #ootd have been custom made for me by some of the most creative people I have so much respect for.
This year, Fashionally – an organization in HK which promotes Hong Kong Designers have decided to have 2 fashion shows- Fashionally Collection#5 for Menswear and Fashionally Collection #6 for Womenswear.  Although both fashion shows are fantastic but I am mesmerize by the menswear show because I often feel that menswear is often overlooked in the fashion industry compared to womenswear (same goes with models and blogging but thats a different story lol)  so it is a great surprise to see a fashion show created exclusively for fashion bros like me.
Fashionally Collection #5 Fashion Show featured 4 Hong Kong Fashion Brands –DEMO, KENAX LEUNG, KURT HO and MODEMENT. . Strong Tailoring was a key trend across the board and is seen in all of the collections as well as monotones although splashes of earth tones appeared in several looks on the runway.  Cropped trousers made a surprise come back and all the designers showed looks which feature separates with a lot of layering- a real reflection of the unpredictable Hong Kong weather we are going thru these days.
Without Further Doodahs, Here are the Collections.

Inspired by Salvador Dali , DEMO gave a modern, unexpected twist to his signature Dandi Boys.  Really love the addition of colour and prints-a big surprise for a designer who loves his monotones.  Also love the diverse range of menswear classics from plaid to pinstripes, wools to tweeds , embroidered sweaters to tailored shorts,  yet all the boys look so cohesive.  The alluring thing about this collection is that it makes you want to be men of that era yet every piece in the collection can be easily incorporated into any man’s wardrobe.  The tweed jacket is one of my many favorites and will definitely be inside my closet next winter. 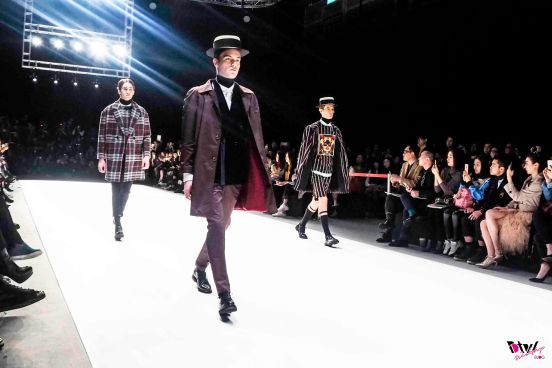 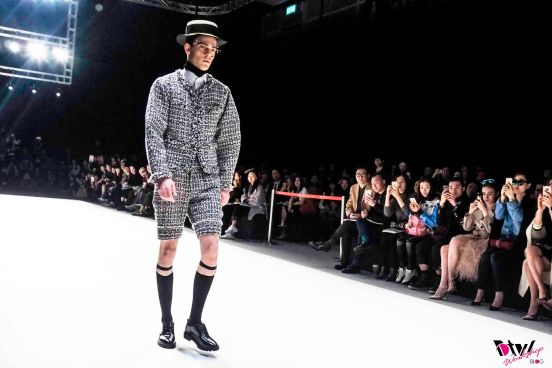 For his latest collection, KENAXLEUNG showed a collection of street wear inspired by sculptor  Mel Kendrick. One of the more casual collections of the four designer , there is a huge sense of collage of patterns, textures, stripes and unexpected accessories which made the collection pop.  Even though my favourite pieces are the suit in patterned fabrics which are given a younger twist by adding deconstructed details and trims, the fringed knit sweaters for me are the stars of the show.  These clothes are street fashion on the runway- something which I am sure we will see on a lot of #ootd post by bloggers and fashionistas in the future. 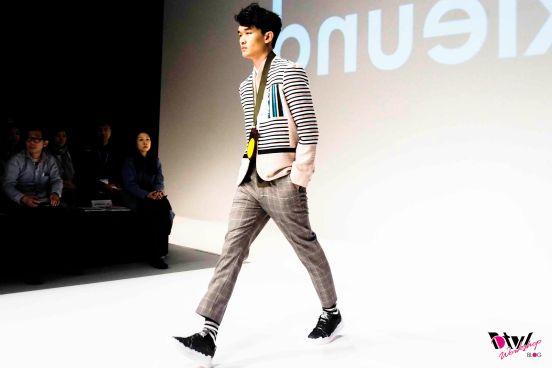 Kurt Ho, Our Dark Knight of HK Fashion presented another minimalist collection with a play of strong tailoring and irregular proportions. The way the clothes are presented- on barefoot models with no accessories gave the model a sense of organic with the fall length train pieces almost looking Kimono like.  Jumpsuits and Tunics are key items in the collection rendered in several fabrics.  Eventhough the clothes are androgynous, the stiffness of the cut and fabric kept it masculine and wearable to fashionistas with who crave for that aesthetic. 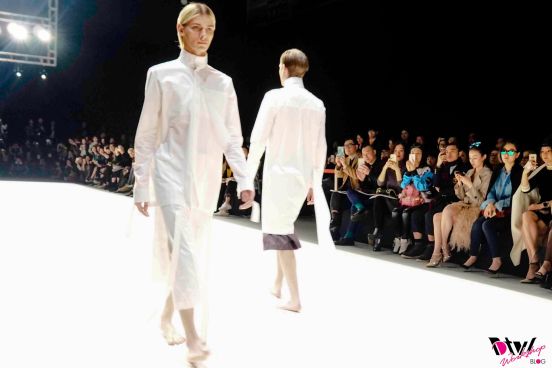 Inspired by Ocean life from its pure form to pollution, Modement another another collection which is wearable with a unique twist.  From the curves of the pattern blocking to the print in the lining of the the caramel wool coat to the slit on the wide leg trousers , these details are what made the clothes so seductive.  It is not easy to make FW Menswear feel sexy but many of these pieces are rich with yet a cheeky twist revealing a little bit of flesh. The head pieces gave the looks a sense of drama making the super wearable collection feel super memorable.  It is very likely you guys will see me in some of these pieces this winter because I loved every thing which came out of the runway. 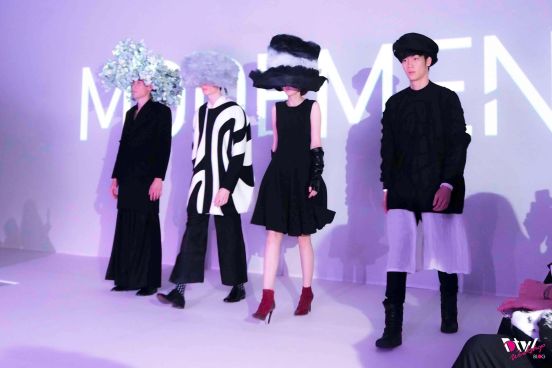 Lastly, I am happy to announce that our Facebook Page is finally here. Follow us for fashion news around the world and also photos of my fashion events this year.
Also don’t forget to follow me on instagram (search for timtimwongbtw for mobile readers) for immediate updates of my life and #ootd photoshoots.